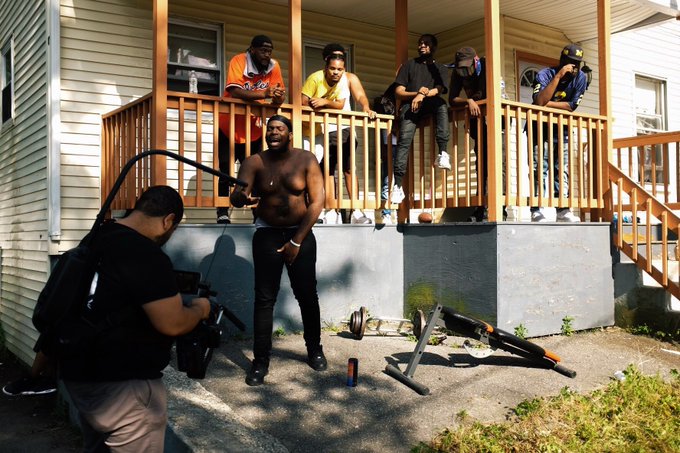 Van Buren Records continues to amaze the masses, as the collective of Brockton artists elevates with each and every new release. Today, Jiles makes his way onto the Graduation Music site with a two-for-one special that includes the official music video for both “Freestyle 001” and “Big Homie”.

What impresses me the most about Jiles’ discography is how he manages to exemplify realism. Rather than shying away from his life experiences and rapping about the many superficial topics that plague modern music, Jiles takes pride in what he’s endured — whether positive or negative. Daymian Mejia does a phenomenal job at incorporating these sentiments into this visual.

“Freestyle 001” takes on a gritty approach, as Jiles takes some time to remind his listeners of the struggles that he’s faced throughout his life. He’s been molded to be an extremely formidable individual no matter what life throws his way, and it’s this attitude that will continue to steer the Brockton native towards a successful future. “Big Homie” takes on a bit more of braggadocios approach than “Freestyle 001”, allowing for Jiles to talk his shit. Equipped with scenes full of his Brockton counterparts, “Big Homie” rests as one of my favorite visuals to-date in 2020. It’s most certainly evident that Jiles has been steadily improving his craft, and it’s a blessing to be able to see his progression in real time. Be on the lookout for more Van Buren Records releases each and every Tuesday, as #VBTuesdays are only just beginning.

Watch the official video for both “Freestyle 001” and “Big Homie” below: 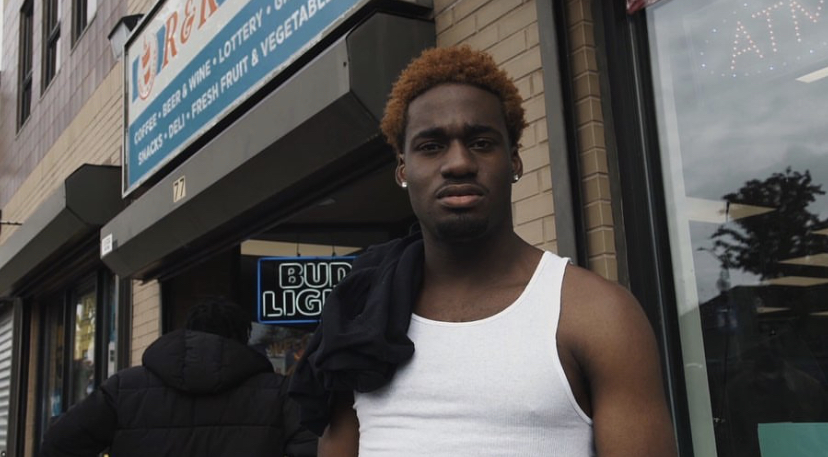 Setting the scene at Brockton High School and various other spots throughout the City of Champions, Saint Lyor’s debut music video wonderfully portrays the communal bond prevalent within this well-accomplished group of artists. Brockton is truly a special place with amazing people, and while the city’s reputation is often misconstrued by outsiders — Saint Lyor and company are here to provide these outsiders with a glimpse of the resilient nature that is instilled within the people from this city.

“No I’m not from Boston! ET I’m from Brockton!!” echoes Saint Lyor as he stands in front of Brockton High School, and it’s at this moment where all of the sentiments I mentioned above come full circle. While this proud, boisterous release may be considered to be centered around Saint Lyor himself, it largely speaks for Van Buren Records and the city of Brockton as a whole — making this video one of the most well-executed that I’ve seen in quite some time.

Helping bring this music video to life was Daymian Mejia and Anthony Picanzi who respectively shot and edited the visual.

Watch the official music video for “Gossip” at the link below:

The boys at Van Buren Records have done it again.

The Brockton group continues to dominate the Massachusetts music scene, and their latest release undoubtedly amplifies the year of success that they’ve been having. The brotherhood has managed to have an already explosive 2019 — from the release of Luke Bar$ and Jiles’ 2 Sides to Lord Felix’s Ultraviolet to Meech’s ‘NineFour, they continue to move with unrelenting force.

Van Buren’s “Live @ the Oberon” is their debut video as a collective, and following its release this past week it’s safe to say that it’s one for the books. The track was produced by Ricky Felix and Kiron, and features an all star Van Buren line up of: Meech, Luke Bar$, Lord Felix, Saint Lyor, and Jiles. The cypher is reminiscent of Odd Future’s Oldie or even A$AP Mob’s Yamborghini High — in that it shows precisely how every member is capable of holding more than their own. While visually opting for a minimal and dimly lit hallway as the backdrop, the strategic choice allows their bars to take center stage.

Although the show at Oberon has been cancelled for the time being, be on the lookout for the next Van Buren performance as it’ll surely be an event that you won’t want to miss.

Watch the official music video for “Live @ The Oberon” below:

Anyone who’s been keeping up with the current climate of Massachusetts’ music scene will undoubtedly be aware of the mark that Van Buren Records has been leaving in 2019. Luke Bar$ and Jiles kicked things off with the release of their collaboration project, 2 Sides, and soon after they were followed up by Lord Felix with the release of In Bloom, Forever. The both of these projects have assisted in cementing Brockton as one of the Bay State’s musical powerhouses, and today, MEECH dropped his second album, ‘NineFour, which only reinforces this statement.

Sitting at a comfortable 6 tracks, ‘NineFour is a solid composition that intertwines vulnerable life experience and futuristic aspirations. Anyone who has kept up with our site throughout the last few years will assuredly recognize MEECH by name, as he’s steadily risen up the food-chain within Brockton’s long list of amazing artists. He possesses an innate ability to flow meticulously whilst keeping his lyrical content up to an extremely high par. Each track off of ‘NineFour contains a vastly different feeling, but much like life itself, flows into the next chapter with true fluidity. In a statement released by MEECH prior to the album’s release he stated:

I HIGHLY urge you to listen to the lyrics, concepts. Smoke one to it, drink to it, meditate to it, work out to it, etc.

Topics such as falling to the Demise of your own and other people’s actions, feelings of being financially/spiritually/mentally Rich & Broke. Struggle with Trusting people wholeheartedly, stress of going to outside festivities and evil aspects that’s currently infested into our world. To elevating mentally, spiritually & physically with a possible life partner.
Every feature was written with so much vulnerability, and authentic ass perspectives. It’s the closest you’ll get to truly know who we are as PEOPLE and what we think and go through. If you don’t personally know us, we gave you a piece of who we are.

The only features on this project are Van Buren’s Jiles, Lord Felix, and Luke Bar$, with each putting their best foot forward to assist MEECH in achieving new heights. “No House Parties (Stay Inside)” served as the first single to be released off of ‘NineFour, and throughout my first few listens to the project it remains formidable as my favorite component of this release. “We VB” which features Lord Felix, is yet another standout, as this track thoroughly encapsulates the energy persistent within Van Buren Records. This collective of highly capable artists is centered around hometown pride and the truthful bond that persists between each member. They only grow stronger as each builds upon their individual discographies, and as they continue to develop alongside one another there’s no telling where the end of their achievements will lay. We’ve already been blessed with a high volume of potent music in 2019, however it’s Van Buren Records that has been paving the way for the rest of Massachusetts.

Lord Felix is a name that’s been featured on the Graduation Music site a countless amount of times, and each of these instances he’s only delivered new musical highs. The Brockton-native released “Nothing” a few months back, with it being one of our favorite releases of 2018. We’re overjoyed that Lord Felix tapped in Daymian Mejia to assist in forging the visuals for “Nothing”, with all parties bringing their talents together to knock this one out of the park.

The music video for “Nothing” features some of Lord Felix’s closest friends and collaborators all enjoying the delightful track in a car. Perhaps one of the best ways to enjoy music, the video does a phenomenal job at encapsulating the exact feeling that can be derived from this song. Lord Felix’s versatility is put on a pedestal here, and both the song and music video are something that the city of Brockton, and the state of Massachusetts as a whole, should be extremely proud of.

We’re only 10 days into 2019, and people like Lord Felix are already beginning to raise the bar for artists all-over. The visuals for “Nothing” are proof of just how talented the members of Van Buren Records truly are.

Watch the official music video for “Nothing” below:

In the early beginnings of Graduation Music, I can vividly remember hearing “Weight Off” and immediately thinking that Lord Felix was a star. Well, about a year removed from that track, I must say that I still feel the same way, as Felix has grown into a polished artist and a leader within Brockton’s scene, proving that there truly is an immense amount of talent and creativity behind the excitement surrounding his name. Today, proving this prowess with quite possibly my favorite offering of his as of yet, the Van Buren representative is here to bless us with a tremendous new single titled “Hold It Down” produced by Yellow Synth.

In essence, this track is, in every way, an illustrative display of the intersection in which lyricism and emotion collaborate seamlessly, attacking this specific point with a unique artistry that I almost can’t bring to words. As he always seems to do so well, “Hold It Down” reminds us of Felix’s unrivaled ability to describe life in its highs and lows using compelling wordplay and a certain “author’s voice” that represents his charisma and character with an unfiltered charm.

It’s alluring in every sense lyrically, but once matched with Yellow Synth’s dreamy production and raw, plucked melodies, this track is quite simply taken to the next level. To top it all off, Felix and Leo The Kind turn this energy into fuel, delivering a high-noted, beautifully-executed hook that I haven’t been able to get out of my head since the first listen. I could seriously go on about this song all day, but all in all, “Hold It Down” is proof that Lord Felix is deserving of all of the buzz his music receives, and that’s that.

Listen to the latest from the Brockton native below:

Brockton native James Guild first blessed our pages a few weeks back with his latest offering “Lava”, an introspective release featuring brutal honesty that quickly marked Guild as a name to keep an eye on.

With his forthcoming project PHNX on the way, the rising talent just recently dropped a visual trailer for the project. The video, directed by Van Buren teammate Lord Felix, features the rising talent in a red pool of dazed confusion, soundtracked by an incredible snippet of a song filled with emotion and descriptive lyricism. I’ve heard quite a few rumors that PHNX is about to make waves, and with snippets this dope, I’m definitely on board with it. Get ready for the project coming November 7th by watching the trailer below.