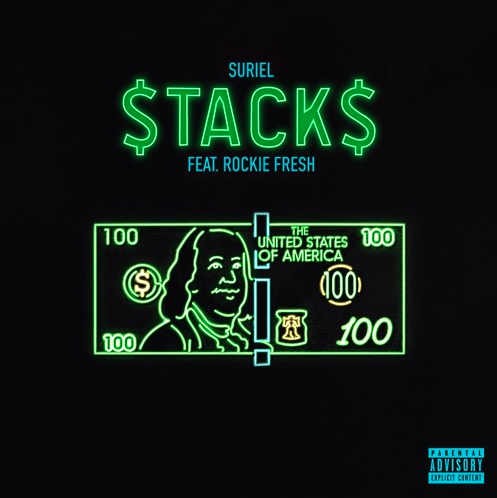 After the recent name change from Wilson to Suriel, this Lynn, MA artist is here to make his debut onto the Graduation Music site with his latest release, “$tack$”. This Canis Major-produced record proves to be a perfect fit within the rest of Suriel’s discography, this time speaking on his work ethic and dedication towards reaching the goals that he’s set for himself. Tapping on Chicago’s Rockie Fresh for a feature, this track is an elegantly-put-together piece of work that’ll have fans continuously returning for more.

Time-and-time again, Canis Major whips up beats that allow artists to channel inner-emotion, all the while making an addictive track that fans can bump over and over. The majority of “$tack$” revolves around financial success, but is most certainly not limited to that. Suriel wants to move past whatever negativity energy was inflicted upon him during his past and achieve every goal that he’s set for himself.  In addition to this, Suriel takes several moments throughout the song to showcase his appreciation towards those in his inner-circle. He’s aware of the “local buzz” that he’s beginning to obtain, but ultimately, he has his sights set on becoming a household name around the globe. He’s prepared to do whatever it takes to reach this level, and following the release of “$tack$”, stating that Suriel is moving in the correct direction would be an understatement.

That said, Rockie Fresh did a terrific job on this song, only furthering the underlying message of persistence and dedication. “I made it all in a month, imagine what I’ll do in years” echoes Rockie Fresh over the somber, yet uplifting instrumental. No one can be sure of when their day will come, but the continuous self-belief and hard work that both Rockie Fresh and Suriel reference are what will allow them to shine at the end of the day. This combination of lyrical positivity and exquisite production are what help to make this one of my favorite releases out of Suriel. With this, his foot is only pressing harder on the gas. He’s in the process of putting the final touches on his next project, and by my estimate, it will be one that’ll surely cement his name alongside some of Massachusetts’ best artists. Don’t sleep on this man, as you’ll only continue to hear his name more and more with time.